It’s Facebook Fairy-tail time peeps! Sit back and get ready for something majestic like The Never Ending Story…not coz there’s a hairy dragon in it…just that my word economy sucks.

Once upon a time I looked after a social media community that grew to over 25,000 likes. It was pretty cool! Getting hundreds of likes on every post, dozens of shares, and comments? Whoa! Thick and fast! This Pringles post (which we didn’t create, just reposted natively) was eventually seen by over 21 million Facebookers across the planet off the 25K page based in Shepparton, Victoria. 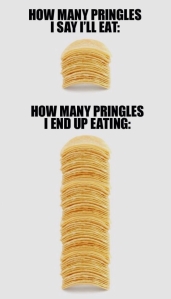 I tracked it’s glorious journey through Asia, North America and Europe. For 2 months it alone maintained a massive wave of engagement which we happily rode, like a proud steed charging the castle. As a result my page attracted 1,500+ likes per week. The kingdom was growing. I call this ‘Nutso’! Others would recognise this content as literally ‘going viral’.

Then, something changed in Facebook Land. The evil Ruler Mark Z demanded taxes from his squatters. Fair call. After all, it’s his space, not my space. (See what I did there…BANG!) This is when the monetisation started, organic reach was being overtly suppressed under the guise of ‘optimising the user experience’. All the while prompting us to pay and boost a post that’d barely been seen by 10% of your total community. The Fairy-tale abruptly ends and our nightmares began.

Combine this dramatic and cruel decree, with my good self changing jobs, where I now managed a Facebook community of just 1,800. It’s not looking good for an apparent social media “guru” who was hired to ramp up all things social. This little frog wasn’t about to turn into a prince anytime soon.

How demoralising is it for us to see our compelling comms, fantastic photos and very important videos reaching a mere 86 people, and if we’re lucky, attracting one piddly little ‘like’?!?

So, do you feel you’re failing at Facebook? Are you paying for reach? Boosting posts? Paying for ‘likes’? Promoting the page or putting your hand in you pocket for a targeted post? Feeding Zuckerberg’s shareholders? Or just relying on organic reach and failing to reach anyone?

Me, I haven’t paid to boost a post or to buy a fan all year. I’ve adopted George Constanza’s attitude to parking and sex.

While I haven’t had any Pringle-esque traction in my current Comms role, I can report that I’ve recently achieved a reach of 150,000 and 5,000+ engagement, with one blog receiving over 2,300 clicks, all off a community of just over 2,500…organically. No cash here, Robbo. Well, there is a small percentage in the budget for the odd priority post, but I’ve yet to dip into it…yet!

During this recent spike, our weekly page likes increased by 20% and sustained that traction for nearly a month. Why pay when you can attract genuine followers who click for the right reasons…they actually like what you do?!?

It’s not like I’m hitting those figures every week, but it is possible. That’s the main reason why I refuse to pay. If the wind is blowing in the right direction and it’s a full moon on Friday the 13th, local government content can still “go viral”.

If you have at least one ‘good’ post per week, you’ll at least be reaching the sum of your community and sit on around 20% engagement: the minimum KPIs I work towards.

There’s another reason I don’t pay for reach. Where’s the return on investment?

I’ve yet to see any hard figures across our many channels where a boosted post has actually yielded tangible results. Yes, it may have popped up on a few more screens, or attracted a stack of likes. But did those user care? Where they more likely to be engaged? Were they motivated to act? Did they apply for the grant, buy the ticket or actually click through to read the press release that even the local bi-weekly newspaper would think twice about running?

I’m wagering no, at least compared to a well timed organic post. I’d love to hear where you have enjoyed ongoing success from boosted Facebook posts. Don’t be shy.

And paying to promote your page? No way. You need to slowly build your community with people who were genuinely drawn to your page because of the content and information there, not because they gave you a lazy ‘like’ or follow before they went to bed.

In just over 6 months my main Facebook community has grown by 33%… not because we bought followers, but we have consistently rolled out quality, timely and relevant content published with a strategic approach. In the private sector, I’m thinking that level of positive growth without additional expenditure would be the type of result that would get a fat thumbs up, a few comments and shared around a bit. Don’t forget to celebrate the win peeps!

And while the nightmare continues, the question remains…how can you achieve similar results for your Facebook communities? Sounds like the foundation of my next blog!!!!

Oh and here’s a treat for all the Gen Xers. And above all…beware The Nothing!!!!!!!